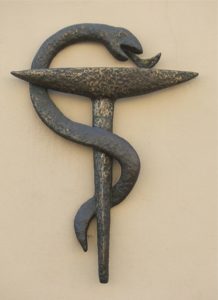 ‘Personally engaged’ paradigms are the corner stones of one’s version of reality and thus, one’s filters to experience’.

In regards to healing practices, useable paradigms are amongst other things culturally endowed.

Attitudes toward health, fitness, disease and dysfunction are all framed early in our lives; these mature and solidify into staunch belief systems. A ‘westerner’s’ mentality has strong mechanistic, reductive and linear patterning. Such an outlook is marooned, as it were, upon a scientific edifice formidably constructed of Newtonian brick and Cartesian mortar.

Descartes
One of the forefathers – Rene Descartes
(France 1596-1650AD)
Catch phrase – “Cogito, ergo sum”
Translation – “I think, therefore I am.”
Descartes introduces the concept of ‘universal doubt’ suggesting that the one thing that cannot be doubted, is doubt itself. From here, he surmises that the mind and body are two separate entities, body being subject to the laws of nature, but mind having the freedom of will – ‘dualism’.

In juxtaposition, then, Lao Tzu the forefather of Taoism
(China 600 BC)
” To attain knowledge, add things every day. To attain wisdom, remove things every day.”
The most likely person to have produced the ‘Tao Te Ching” – a poetic treatise on the Tao.

In a nutshell, Lao Tzu, propounded the doctrine of ‘observing’ phenomena, and their ‘unfolding patterns’ especially in regards the natural laws, thus gaining deep and abiding insight.

The Tao Te Ching is second only to the Bible in terms of being the most translated classical text.

What is intrinsically valuable, amongst many other facets of Taoist thought, is the notion that the very essence of experience is ‘at hand’, available in each moment. To be aware and conscious of the arising moment (i.e., meaningfully absorbed in the present), means to be congnisant of the actual underpinning influence of the Tao, the ‘flow of events’.

Note:- One may not necessarily understand fully nor completely fathom experiences, as a result of such present-mindedness, at least not immediately.

What is vitally more important though, is recognizing flows and undercurrents, repetitious phenomena and enduring patterns which continue to recur over the course of entire lives. And recur they do, albeit in many forms, from dreams, chronic symptoms, addictions, compulsions, altered states, ageing, relationship angst and demise and so on.
This recognition, stems from the awareness achieved primarily through a keenly upgraded ability to observe the moment and all the things occurring within it.

This recognition results from a complete and full-blooded surrender to the zeitgeist (time spirit) of now………………… and not a moment too soon!

If we follow Lao Tsu, then maybe we strip away outmoded filters to reality, thereby gaining access to wisdom.
This, as we’re discovering, has vital importance and immense applicability, in terms of healing and dis-ease.

It has a matrix of linearity, predictability and is the ‘temporal currency’ with which whole lives are planned, enacted and spent. In this mindset, one wakes in the morning with a ‘framed’ idea or version of the day ahead (see section on ‘The Tao’, for expansion on this). This expectation presumes the layout of the day and begins to pre-empt (unconsciously) the flow of events, especially in terms of timing. The framing filter is then operating constantly and the framer is preconceiving life.

Physics itself, is on the edge of altering these mechanistically-inclined time habits, and Aboriginal thought has travelled in parallel course, over aeons………….

(from ‘Dreaming While Awake’ by Arnold Mindell Ph.D., Hampton Roads Publishing Company, Inc., 2000. Page 8)
‘While modern physics and Aboriginal science differ, they also share certain ideas. Indigenous people speak about Dreamtime as the root and essential power from which everything else comes; quantum physicists speak of an invisible mathematical entity called the quantum potential from which reality arises…………………………………….As you may know, the quantum world cannot be seen or measured directly. As Werner Heisenberg once said, the quantum potential is a sort of ‘tendency for things to happen.’This stuff is in reality a re-discovery, reiterating the perennial wisdom of the ages.

from Native American Wisdom on Time
In the Hopi world, everyday reality is already manifest; thus real objects are part of the past. In other words, the Hopi concept of past is the present for everyone else because, according to Hopi thinking, the present everyday reality is the result of experience that has already unfolded! The Hopi do not refer to past, present or future, but instead speak about the present and past in terms of “that which is manifest”. The future is “that which is beginning to manifest”. The future is a Dreaming that has not yet unfolded.

(from “Dreaming While Awake” Dr. Arnold Mindell,Hampton Roads Publishing Company).
Time, then, is a highly subjective construct relative to one’s points of reference. This way of approaching time (and events) probably looks like it works well; possibly because it creates a sense of being in control of our localized fate(s). My ‘time-paradigm‘ will influence my attentiveness to dreams (nocturnal) and dream-time; to synchronous versus coincidental occurrences, to my attitude towards chronic symptoms, to accelerated ageing, to the crippling effects or otherwise of stress and the fashion in which I prioritise the ‘course’ of my life.

The fluid nature of time:-

Time starts to feel fairly fluid, when based on the actual experience of its passage.

Relevance of paradigmatic horizons, to healing.
In health versus disease, timing is of the essence. To track back a symptom to its onset (provided the belief that life is patterned, not completely chaotic) or to follow its chronicity and repetition, means just that : “tracking”. A symptom’s relationship to time passages, chronological and sociological events, its ‘time-rendered’ aggravations or remissions; these are all intrinsic qualities to be plumbed and noted.

A great diagnostician can uncover the symptom-signature’ (see section on ‘Symptoms’) by first, securing the time-frame and then the symptom(s) basic self-expression of appearances and longevity. Symptoms are understood (in transpersonal circles), to be factored into nocturnal dreams, prior to their ‘substantial’ manifestation in the body. Features of our symptoms then, lie outside of our linear constructs of time (and space). One’s entire sense of time affects and is affected by a disease process.

When I’m cut, I expect it’ll be healed in days and I tend to leave it to nature; just keep it clean.

When a person is told they have ‘Chronic Fatigue’, I doubt they see the light at the end of the tunnel easily.

When someone is advised they have cancer, they don’t want to see ‘the light at the end of the tunnel!’

The very chronicity surrounding disease states influences symptom evolution and outcome expectations. Recurring symptoms generally become (over time) a status quo for patients. They are almost resignedly and imperceptibly accepted on-board as ‘part and parcel’ of who/what one is. This is especially prevalent in recent times whilst powerful pharmaceuticals or amazing herbal formulae, quell pain and discomfort profoundly, dampening down the important disquiet. Thus ‘I can live with it”.

These symptoms need to be fetched out in an intensive Case History. They are the inner demons, whose silenced volcanic activity, though seemingly dormant, are more like rust – never sleeping. This subterranean seedbed is quietly creating the next level of symptom expression.

Recall one of the laws of thermodynamics – “Energy is neither created, nor destroyed.” I realize that this looks like I am considering the mind and body separately, however, I have only deconstructed the mind/body continuum to discuss the arisal of phenomena. Understanding that, at whatever age, the dominant signal (disharmony) is information moving through the most available channel of expression: namely the body symptom. My very expectation of a disease process create far reaching repercussions on healing time. Expectations emanate from the field of paradigmatic seedlings in the mind.